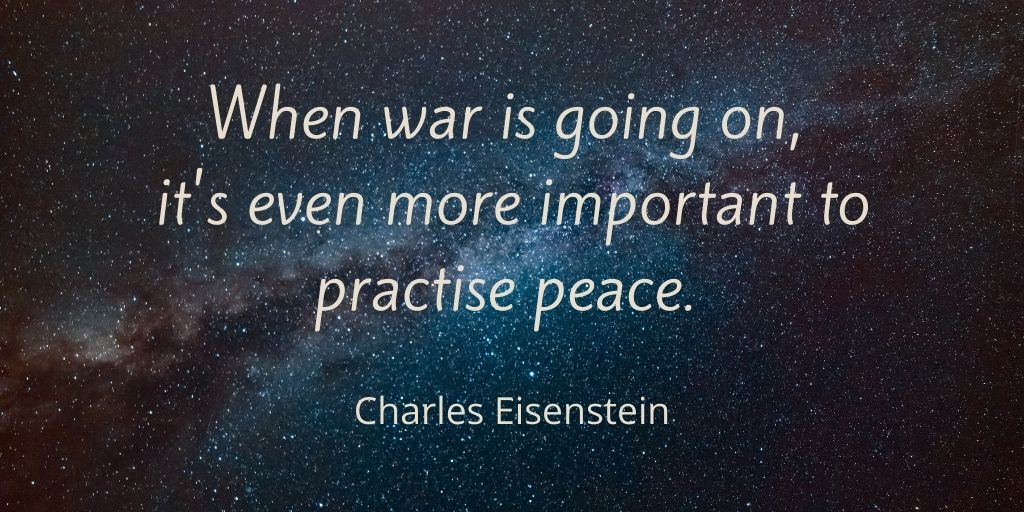 When war is going on, it’s even more important to practise peace. Does that sound counter-intuitive—or maybe even downright ridiculous—to you? It would to many, because we aren’t used to thinking in terms of energy fields.

The field of peace…

So let’s consider the dynamics of peace in the context of energy. In a recent zoom session with his on-line community, Charles Eisenstein spoke about this:

In those moments when you choose not to demonize somebody and instead hold them in the fullness of their humanity, you generate a field of peace. As more of us do this at every chance that comes up, it will change the climate [of the field].

Peace is the capacity to hold the parts that we are uncomfortable with. It is not the same as capitulating. It is how you choose to see [others or the situation]. When you choose well, you are making a statement about what is possible for human beings to do.

I’ve experienced this shift in an energy field…

As I’ve mentioned before, an energy field forms when a group comes together. And each member of the group contributes to the field.

Recently I was participating in a small-group zoom session. There were four of us from various parts of the world—Britain, US, Germany and Canada. When conversation turned to the war in Ukraine, we started down the isn’t-this-awful path.

Then the woman from Germany, who is geographically closest to the chaos, began talking about how she’d witnessed people offering help to a degree that had never occurred before.

That prompted me to add two examples that were reported on the radio during the week before our meeting. One was Village Ice Cream, which dedicated 100% of Sunday sales to Ukraine relief. Calgarians lined up outside despite the cold weather, and staff stayed until the last person was served. This one-day blitz raised $100,000—five times as much as sales on their previous best-day-ever.

The other example was a woman who had come up with a simplified method to send supplies for refugees arriving in Poland. Because she has a cousin in Poland, she ordered emergency items to be delivered by amazon to her cousin who then distributed them at a refugee reception centre. The amount she has been able to send increased significantly as word got out and family, friends and neighbours contributed money to fund more orders.

The other two group members had similar stories to share. By shifting to this path, our group energy became peaceful rather than agitated. The difference was palpable, all because someone chose to redirect the conversation by speaking a story about a different aspect of the war.

For me it, it was a graphic reminder that what each of us puts into the field is crucial…and powerful.

And therefore, we each have the power to change things.

From my perspective, Charles Eisentein’s talent lies in helping us find the best in ourselves when he writes and speaks about civilization, money, crisis, and transition. He thinks deeply and expresses himself beautifully. You can find more on his website and YouTube channel.

This activation is designed to help you ground in the power and strength of your own energy, instead of being pushed around by what’s going on in the world. It helps you be at choice rather than responding with a knee-jerk reaction.

Sit quietly and let energy work for you. Energy activations are designed to enliven (activate) an aspect of your energy field. The words communicate directly with the field, guiding it to a new formation as needed. For more free activations, go to Sarah McCrum’s YouTube channel. For courses and activations for purchase, visit Sarah’s website.