This is my concluding post on empathy. It’s a subject that has been on my mind a lot as I keep seeing how desperately we need more empathy in this world—and as I’ve become aware that there is room for increasing it in myself. 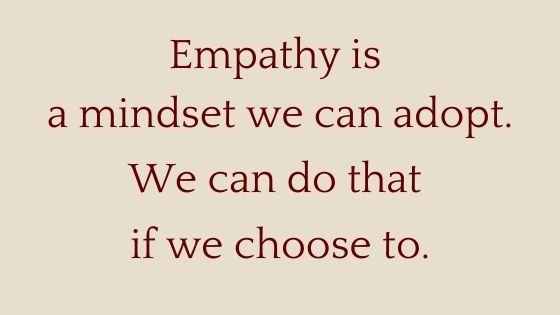 One thing I learned is that psychologists have identified two types of empathy—cognitive empathy and affective empathy. And there is an important distinction between sympathy and empathy.

Sympathy is feeling sorry for someone without actually experiencing their emotions or understanding what that person is going through. Suppose someone has fallen into a deep hole and can’t climb out. An empathetic person will look for a rope to help the person out or, failing that, phone emergency services for help. A sympathetic person would feel sorry about the situation and get into the hole too.

Cognitive empathy, often referred to as perspective-taking, is the kind of empathy that Simon Sinek spoke about in business leadership  and that product designers implement to make more useful products.

That other piece, affective empathy, is what makes us human. It’s the ability to understand how the other person feels and to feel with them. It’s often referred to as a shared or mirrored emotional response.

Mary Gordon is a Canadian educator, author, parenting expert, and child advocate who has created programs informed by the power of empathy. She has received many awards—the Governor General of Canada Innovation Award, the Order of Canada, the Queen Elizabeth II Diamond Jubilee Medal for significant contributions and achievements by Canadians, and the Manning Innovation Award among others. Mary Gordon’s work has been featured in many print publications and two documentaries. Her book, Roots of Empathy: Changing the World Child by Child, is a Canadian bestseller.

In this TED talk, Mary Gordon shows how children find the humanity in themselves through interacting with a baby in their classroom. It is a compelling presentation about teaching children through their hearts and minds to create social-emotional learning and emotional literacy. Don’t miss the story about Darren near the end.

Roman Krznaric is a public philosopher who thinks, writes, and speaks about the power of empathy to change society. He’s the founder of the world’s first Empathy Museum and has written several books. Empathy: Why It Matters, and How to Get It is based on over ten years of research to discover how we can boost our empathy.

The social glue that holds us together…

A lack of empathy causes us to dehumanize each other, and sadly there is a growing global empathy deficit.  Consciously increasing our empathy is the antidote.

According to Krznaric, empathy helps us improve our relationships, enhance our creativity, rethink our priorities in life, and tackle social problems—from everyday prejudice to violent conflicts.

Few of us have reached our empathy potential, yet it is possible. In his book, Krznaric sets out the six life-enhancing habits of highly empathic people, whose skills enable them to connect with others in extraordinary ways. You can develop empathy throughout your life. These two suggestions are good places to start…

If talking to a stranger seems daunting, here are some conversation openers…

To make the question a little less abrupt, you might want to preface it with “I’m curious…” Curiosity is an asset for anyone cultivating empathy. According to Ayishat Akanbi, when we have a curious mindset, we are less reactive—there is no rush to judgement and criticism of the other.

A role model of empathy…

In the conversation that follows, Ayishat Akanbi is not talking about empathy. Instead, she is talking from empathy about a socially hypersensitive subject that directly relates to her. I found it a compelling conversation. If your time is limited, move ahead to the 45-minute mark to get the flavour of empathy at work in a setting where it’s usually lacking.

They start out talking about “wokeness.” I had to look up what that means in their context. “Woke, as a political term originating in the United States, refers to a perceived awareness of issues concerning social justice and racial justice. It derives from the African-American Vernacular English expression “stay woke,” whose grammatical aspect refers to a continuing awareness of these issues.” Wikipedia

As she demonstrates, Ayishat Akanbi is genuinely interested in people who do not see the world in the same way she does. Her game-changing essential qualities?

How do we increase our empathy?

…by recognizing that maybe there are no good people, there are only people who are flawed trying to be better. 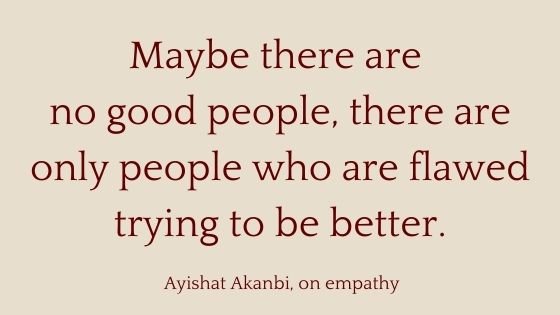