Experiencing a pandemic has got many of us reflecting on what is working in our world and what isn’t. In essence, it has shone a spotlight on our dysfunctions.

Much of what is wrong (or right) with our systems starts with our collective mindset.

A mindset is a set of assumptions, methods, or notions held by a person or group. It’s a habitual or characteristic mental attitude that determines how we interpret and respond to situations individually and collectively.  We become so used to our mindsets that we don’t see that our thinking is fixed in this particular way. To us it’s normal.

If you observe behaviours of yourself and others around you, it’s not difficult to identify mindsets. Here are a few examples of what you might discover…

Empathy is also a mindset, and the subject for today. This post was prompted by Simon Sinek‘s talk on empathy. Since he’s known for his consulting work with businesses and organizations, I was curious. Empathy is certainly not something I associate with business, so I wondered what he had to say about it.

Simon Sinek is one of the visionary thinkers of our time. In his work with businesses and organizations, he discovered how great leaders think, act and communicate. His first TED Talk, in 2009, is the third-most-watched with 40 million views and subtitles in 47 languages. He hss also authored several best-selling books, the most recent being The Infinite Game.

Simon Sinek describes himself as an unshakable optimist who believes in a bright future and our ability to build it together. That undertone is what I find refreshing about this talk—the reassurance that my instincts are correct, that we don’t need to buy into the heartless model of business, that business can and needs to operate from a different mindset. 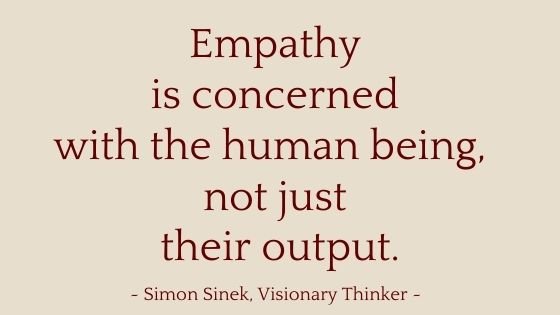 More next week about empathy at work…in ways that affect us every day.