As Brené Brown says, this is the time for courage over comfort.

That can be a challenge.

Comfort is so tempting.

Retreating to the familiar makes us feel safe. And that’s what our primal, survival brain wants above all, to keep us safe.

Where do we find comfort?

Comfort can be found in something as tangible as a food that your grandma used to make or as intangible as your viewpoint on how the world works.

Viewpoints are elusive because we often don’t know we have them. Like accents. I didn’t know there was a Canadian accent until i was 48 years old. I knew about accents and could recognize them when I heard others speaking accented English. But I spoke like all the people around me, so I didn’t have an accent as far as I knew.

The moment of awareness came when I made my first trip to Schumacher College in England. Students from several countries had arrived to study The Web of Life with Fritjof Capra. An American woman was next to me as we gathered for the first time. (I knew she was American because of her accent.) After a brief exchange of pleasantries, she asked me where I live in Canada.

Me: How do you know I’m from Canada?

Her:  Well, your accent, of course.

We all have blinders…

That experience was my first awareness of one of my mistaken beliefs. An accent is a trivial example, but the same is true of our mindsets and viewpoints. We tend to be so used to how we see things that we have no idea there is another point of view. 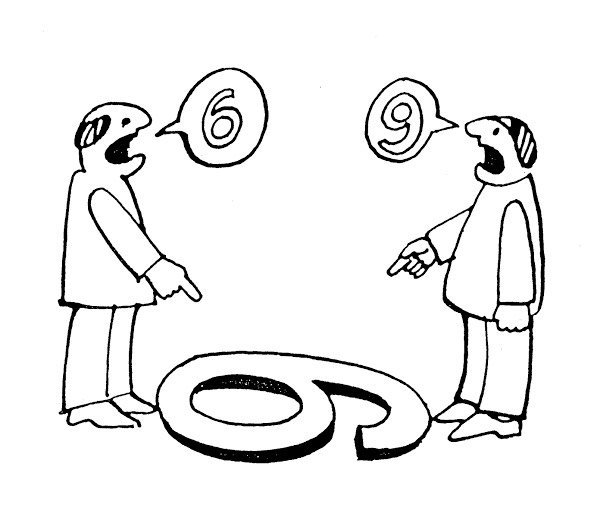 Why does changing our viewpoints take courage?

Changing our viewpoint challenges us to leave the comfort of the familiar, to step away from our current position and see how the world looks from another vantage point. If we go so far as to take the position of the other, we might see that what we saw to be true is no longer the case from that new viewpoint.

Then we have to deal with that new information. After all, our life and how we lived it was based on our original perception. Can we pretend we don’t know what we now know…and thus carry on as we had? Or will we have to integrate that new perspective because the knowledge will haunt us until we do? Faced with this dilemma, many of us dig in, entrenching ourselves in the position we know,to avoid having to make those hard decisions.

When we do take a new viewpoint, there’s also the risk it will disrupt relationships that have been forged over years. Your  tribe, the people you identify with, may not like it if you rock the boat. When you express a contrary view, they may feel challenged, as if you are being critical of them and their beliefs. The extreme result could be losing friends and estrangement from family. Not a comforting prospect!

And why is courage so hard?

According to Brené Brown, author of Daring Greatly,  you can’t get to courage without walking through vulnerability. Based on years of research, she says the elements of vulnerability are risk, uncertainty, and emotional exposure—exposure as being imperfect and therefore unlovable. All are things we try to protect ourselves from. Yet, the paradox is that pretending you are not vulnerable makes you the most vulnerable. But it is the willingness to show up that changes us. It makes us a little braver each time.

In this 2011 Ted Talk, Brené Brown shares what she had learned by then about vulnerability. It has had 3,750,575 views for good reason. If the video doesn’t show up, watch it here.

And in these days of the pandemic, vulnerability might look like asking for help when you need to. Do it. It’s good practice for getting used to being vulnerable. It will make you a little braver for the next time.