I’m thinking of the holiday advantage of having family members all together at some time during the season.

And do what with that opportunity?

Use it as a chance to talk about your wishes for body disposition when you are no longer using it. Or—if you are an adult child of living parents—it’s a chance for you to find out what they want.

What would I talk about? 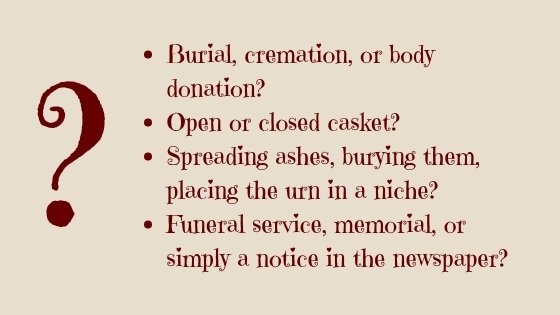 But won’t they figure out what to do?

Sure, they’ll do something with your body after you’ve died. They have to because of the urgency of the situation. But they may go through a lot of agony wondering if they’re getting it right. Or they may do something totally contrary that leaves you shouting, “No, no, no!” from out in the ether.

They may end up disagreeing with each other, each one certain he or she knows what should be done. Case in point, my grandfather who, it turned out, was deeply offended by the idea of cremation. Not just for himself but for everyone.

My mom, his daughter, died before he did. I was the executor and in charge of making the arrangements. When he found out she was to be cremated, he was distraught, calling me multiple times to coerce me into burying her instead. The exchanges went like this.

“You can’t burn her. You can’t. It’s wrong. Don’t do it.”  (Repeated several times, louder and more desperately.)

“But Grandpa, this is what she wants.”

Mom died at age 57. Young. Before her time. But she didn’t die without warning. She had breast cancer in 1980, when treatment was less successful than it is now, and she died in under two years. But she did have those two years to make sure we all knew what she wanted. She told us, her kids, that she wished to be cremated… but I imagine she avoided that conversation with Grandpa because by then she didn’t have the strength to hold her ground with him.

Four days before Mom’s death, I was in the hospital taking notes about her wishes. The week after she died, I scrambled to pull myself together and make arrangements (without the benefit of email and internet) for a memorial in her school auditorium in a town 200 miles from where I lived.

I got through it, as one does. I was 35. It was tough. Fending off my hurt and angry grandfather made if a lot harder.

Caitlin Doughty describes herself as a mortician, activist, and funeral industry rabble-rouser who aims to create a death-positive attitude in Western culture. She’s the founder of the Order of the Good Death, whose mission is to make

…death a part of your life. That means committing to staring down your death fears—whether it be your own death, the death of those you love, the pain of dying, the afterlife (or lack thereof), grief, corpses, bodily decomposition, or all of the above. Accepting that death itself is natural, but that death anxiety and terror of modern culture are not.

Here’s her take on dealing with death denial.

I was just reading (watching) …

I like Caitlin’s practical suggestion for getting a conversation going. Her YouTube channel will give you more quirky topics than you might ever imagine. Here are a few to get you started:

You could also bring up some of the less-known facts that I’ve included in my blog thus far. You could start with something like this:

These are some ideas. I’d love to hear your conversation starters.

2 thoughts on “Seize the opportunity…”