-*** Time for this post? Reading…8 minutes. Viewing…9 minutes. Thinking about what you would do…as you wish.

After writing last week’s blog about being with the dying, it occurred to me that… 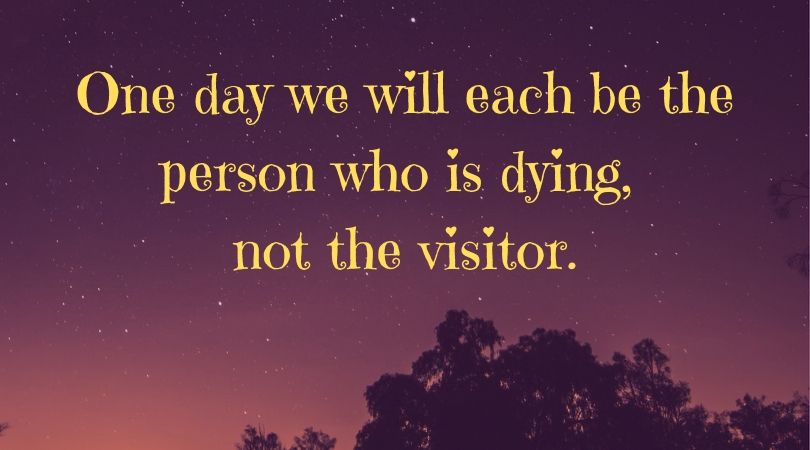 As such, we have responsibilities…

The dying person can help friends and family in a variety of ways, yet we don’t typically think about dying from that point of view. I suspect that’s because we tend to approach death passively, as something that happens to us rather than a normal life process that we will ultimately engage in, like it or not. Instead of participating, we come at it from a victim mindset.

Role models for a different way…

One of the best things about the internet is the access we have to people who think and behave differently. It’s a good way to gain a broader perspective and find our place within the possibilities.

Pieter Hintjens was a software developer, writer, and father who was diagnosed with terminal cancer at age 53. An article in The Guardian reports on Hintjens’ final website post in which he outlined his “protocol for dying.” He wrote about what not to say, what can lead to happy conversations, and the duties of the dying. He listed the following duties of the dying, elaborating on each:

He makes a very good point about being honest. When the dying person is honest and transparent with others, it makes things much easier for them. When they can talk about your death with you, it helps them process what’s happening.

Hintjens’ approach was proactive—to be the one initiating the conversation rather than creating a climate in which others had to tiptoe around him, not sure what to say. That is definitely one of the helpful things a dying person can do.

In addition to talking about our situation, we can help others know how to respond by the way we communicate. Choice of words and how we put them together sets the tone for all communication, whether written or verbal. Pieter Hintjens’ tone is clearly pragmatic and logical. Although he doesn’t use these exact words, he conveys that: It is what it is. We all have to deal with this situation, so let’s get on with it.

His manner isn’t everyone’s. Some prefer a softer approach, but that doesn’t mean saying nothing or pretending it isn’t happening. Ignoring or denying the situation doesn’t help, it just invites people to default to the cultural norm, which is to see you as a victim. Unless you want to be treated that way, it’s important to communicate intentionally.

The way around landing in victimhood is to set the tone by choosing your words thoughtfully. Below is a good example. Sarah Kerr, who I introduced recently, has posted lots of educational material, including videos, on a wide range of topics related to her work as a death doula. When she discovered she has breast cancer, Sarah talked about it in a video.

Her diagnosis is not terminal. But any cancer is a serious condition and people have a culturally induced perception of what it means. Notice how she sets the tone in her communication:

We got a clear sense of Sarah’s viewpoint about dealing with her cancer. In case this interested you, here’s a summary:

Most of us don’t write on a website or speak on video—and a health crisis is not the time to start. But an email update to your near and dear is a good way to get everyone on the same page—as long as you write clearly so that you aren’t misunderstood.

Your newsletter can provide details about your diagnosis and treatment, thus ensuring that everyone has the same accurate information. When deciding what to divulge, though, keep in mind my mom’s advice: Never put anything in writing that you wouldn’t want to see on the front page of the newspaper!

Besides providing the facts, a group email can set the tone by sharing how you’re feeling—physically, mentally, and emotionally. Here’s an example of tone-setting that came from a family member who had used email to update all of us after her cancer diagnosis.

I’m feeling fine, other than the normal issues with my back assumed to be caused by longstanding arthritis and a pelvis which likes to get out of line on a regular basis and has been acting up during all the various testing situations. I am still seeing the chiropractor who is cautious and doesn’t work near the area of L1-2. That will hopefully keep me mobile for a long time in spite of the new issue.

I have scratched bungee-jumping and parachuting off my bucket list and I’ve quit jumping off curbs and bottom steps to protect the stability of the diseased bone.

What are your thoughts about our responsibility when we’re seriously ill or dying? Do you have experience to share, examples of what worked or didn’t? As always, I invite your comments.