I loved the gentle way that Dr. Kathryn Mannix, in a previous post, described how the body shuts down as we approach our end of life.

I’m also interested in what happens as my soul meets death. In a way, I feel as if I actually know, but just haven’t quite remembered yet. So I’ve been looking into it in hopes of jogging my memory. Today I’m sharing what a couple researchers have found out about deathbed phenomena. 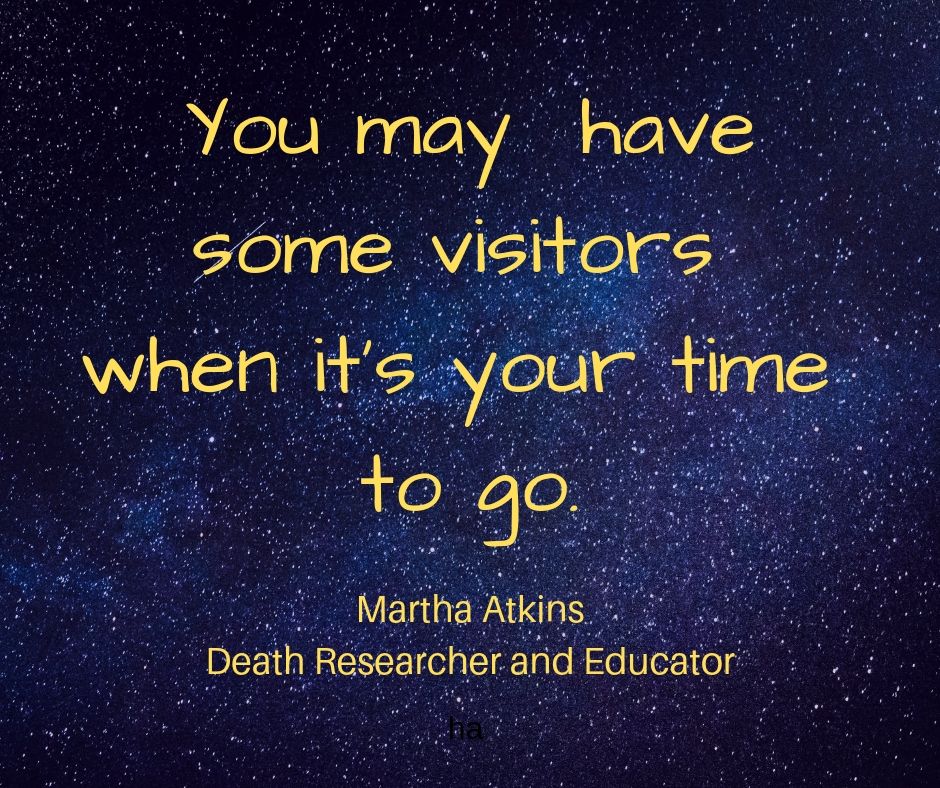 Martha Atkins is a death researcher and educator. In this TED talk, she describes deathbed phenomena based on what she learned from both the dying and bedside witnesses. It’s her view that this knowledge can bring comfort to patients and caregivers by helping them understand what they are experiencing. Her book is Signposts of Dying: What you need to know.

Dr Peter Fenwick is also a researcher in end-of-life experiences. He’s a British neuropsychiatrist who worked in hospice care and documented many fascinating phenomena including premonitions, clocks stopping at the time of death, relatives seeing light in the room of the dying and shapes leaving the body, visions of the dying and terminal lucidity. He is co-author of The Art of Dying.

This next video is a long one, but interesting for those wanting to know more. He starts out describing neuroscience and a theory of consciousness based on his research into near-death experiences. End-of-life discussion starts at 15:25 if you want to skip ahead. At 19 minutes he begins talking about what you might expect.

Dr Fenwick concludes by saying that the way we medicalize death, sweep it away, don’t talk about it, is producing a culture  in which we deny our responsibility. Yet, what we really should be doing is starting with the children. Bring death into the open, discuss it, teach them that it’s a normal part of living.

When children know about death…

Be prepared. When they know, they might say surprising things. This is one of my favourite grandchild stories.

When my older granddaughter was about seven, we were looking through a photo album. As she oohed and aahed over her mother’s wedding dress, I said, “I made that dress, you know.”

“Ohhhh,” she said with wide eyes. “Will you make mine?”

Before I could reply, she paused and I could almost see the wheels turning in her head. Then she quickly added, “If you’re still alive then.”

Matter-of-factly. No drama. The way it should be.

Your thoughts about end-of-life phenomena or about teaching children about death?